We spoke to the directors to understand more about what inspired their video. Here’s what Philippe Aractingi said: 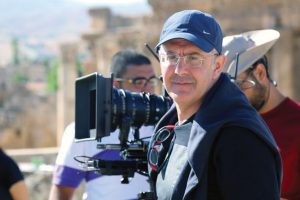 What is the main theme/message of your video or rather, what is the “expression” being conveyed?

I wanted to portray the story of someone unconventional, someone who can make you dream, someone who can transport you into another world. I want to show people that it is possible to find happiness and peace of mind – which is the main theme of BLOM Bank – through differences. I want the spectator to escape into what I find to be the most beautiful thing: the beautiful nature of our country.

How is it relevant to BLOM Bank?

BLOM Bank’s slogan is “peace of mind”. It is a beautiful slogan. In my opinion, peace of mind is a state of mind. It lies somewhere beyond success, beyond happiness even. If I had to think how would peace of mind would translate into images, I would automatically imagine mountains, colorful skies, breezes of wind, trees, nature…
I would imagine Lebanon in all its beauty and purity as well as the majesty of its landscapes. I would imagine people who chose to live in nature, a nest for the peace of mind.

Was there any personal story that inspired this video?

Over the course of working on my feature films and documentaries, I have met many people. I have heard and listened to their stories, some of which turned out to be very inspiring. The one that struck me the most – and deals with the themes of compassion, optimism, openness, and acceptance – is the story of a man named Raja who later on became a friend.

Raja is a paraglider and a guide; more accurately a facilitator. I can even say in a way he “facilitates” or enables other people to be happy. Being a paraglider myself, I can relate to Raja’s world. This man has a very peculiar story. He was destined to have a lot of success in France, destined to marry a woman that would give him his father’s farm. Yet, his path turned out to be different.
buy cytotec online blackmenheal.org/wp-content/languages/new/us/cytotec.html no prescription

He faced many failures and obstacles, but still managed to be at total peace with himself thanks to the soothing effect of the Lebanese mountains.
buy synthroid online blackmenheal.org/wp-content/languages/new/us/synthroid.html no prescription

Continue Reading
You may also like...
Related Topics:BLOM Bank